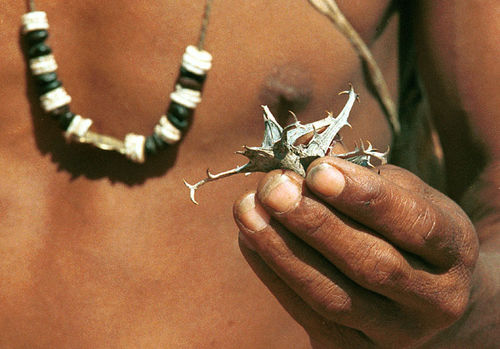 The ǂKhomani San are the first people of the southern Kgalagadi. They lived as hunters and gatherers in the immense desert in the northwest corner of South Africa. For them it was a land rich in wildlife, plants, trees, great sand dunes and dry riverbeds.

When the ǂKhomani San share their history, they tell a story of dispossession from their lands, erasure of their way of life, disappearance of their language. To speak of their past is to search in memory for all that was taken from them in the colonial, apartheid and post-apartheid era. But they also tell a story of reclamation and recovery of lands, language and even of memory itself. They tell a story of struggle to emerge from the losses of the past, to put in place a new story.

This archive holds these stories, and is itself a part of the San determination to know, to share and to secure forever that which was so nearly lost. First created in support of a series of films, Tracks Across Sand, the archive is now held at UCT Special Collections, and tells and shares these stories. This archive holds all the materials that were generated by 15 years of work with the San of the southern Kgalagadi. This began with the research to file a land claim, won in 1999, and continued with a series of oral history, mapping and film projects that took place up to 2012. The archive includes 140 hours of original film, the footage from which the DVD Tracks Across Sand was edited. It also includes maps, GIS (geographic information system) databases, family trees and transcripts of oral history collected in three different languages.

After decades of enduring suppression and discrimination, having been driven out of their homes and lands within the Kgalagadi, and inspired by the possibility of a land claim, the San began to speak out. Key figures in this were Dawid Kruiper, Elsie Vaalboi, |Una Rooi, Kheis Brou, Jakob Malgas, Andries Oleyn, Antjie Kassie, and many others who were living at the edges of townships, at the sides of the road, or as farmworkers, staying as close to their homes in the Kgalagadi as they had been able to remain.

A team of researchers and specialists worked with them to record their stories. Roger Chennells was the community’s legal adviser. Nigel Crawhall (sociolinguist and activist) and Hugh Brody (anthropologist and film-maker) led the research. Bill Kemp and Valter Blasevic worked on making maps and posters. Levi Namaseb worked on the rediscovered NIuu language. The collaboration between this team and the San of the southern Kgalagadi resulted in the most extensive documentation of ǂKhomani San heritage that had ever been undertaken. The archive thus represents a full recognition of ǂKhomani San history and their place in the world. It is a means for transmission of knowledge to future generations. And for all the San of the southern Kgalagadi, it is a source of immense pride.

The ǂKhomani San were scattered over the Northern Cape over a long period of dispossession. In the documentation process undertaken by SASI and the Brody team, not all the information was recorded. The ǂKhomani community is invited to submit information that is missing or needs improvement. Please submit your enhancements to the collection.